GM/TREASURER PETE KAMPA at yesterday’s meeting refused to identify which map was being used for election purposes this year, so another 80+ mile round trip to Mariposa County Elections office.  Long as I was going to be in Mariposa thought I might as well drop by the Board of Supervisors Meeting and torture them with my continuing blah blah blah complaints about PETE KAMPA and his Board permitting the reconfiguration of our surface water treatment plant into a GROUNDWATER SUBSTITUTION FACILITY TO CIRCUMVENT WL11395 WITH PUBLIC FUNDS TO THE SPECIAL BENEFIT OF LAND DEVELOPER’S OUTSIDE THE POU OF THE WATER LICENSE!

“Good morning Supervisors, oh boy, for decades thousands of innocent and legal Merced River Water Entitled Customers of the Lake Don Pedro subdivision have been FORCED by the LAFCO created LAKE DON PEDRO COMMUNITY SERVICES DISTRICT, to SUBSIDIZE EXTREMELY EXPENSIVE GROUNDWATER SUBSTITUTED SERVICE FOR  PROPERTIES LAFCO ALSO ANNEXED INTO THE DISTRICT THAT ARE OUTSIDE THE LEGAL PLACE OF USE  for Merced River water under license 11395.

All of these annexations were apparently accomplished without a LEGITIMATE MUNICIPAL SERVICE REVIEW CURRENT EXAMPLE: A 900 ACRE PROPOSED RESIDENTIAL SUBDIVISION ACROSS THE STREET FROM THE LDPCSD HAS BEEN ACTIVELY CONCEALED FROM THE PUBLIC FOR OVER 20 YEARS AWAITING A GROUNDWATER SUBSTITUTION SUPPLY FOR DEVELOPMENT WHICH GENERAL MANAGER PETE KAMPA HAS RECENTLY PROVIDED THROUGH USING  PUBLIC MONEY AND RESOURCES THROUGH GOVERNMENT GRANTS TO  PRIVATE LAND DEVELOPER, TO OUR, … ah …DISTRICT BUT, BEING USED FOR PRIVATE LAND DEVELOPMENT BENEFIT.

TODAY’S APPEARANCE was prompted by GM KAMPA’s refusal at yesterday’s Board Meeting to identify the map referenced in the election resolution your board, and your elections, excuse me, I’ve got a lot of scribble notes, your elections official will receive despite the fact the STATE WATER BOARD’s September 2017 NOTICE OF VIOLATION  clearly detailed that all of our various CSD maps are contradictory.

Note, GM Kampa’s statement of relying on whatever map is on file with Mariposa County was also his response to multiple requests to contact the STATE WATER BOARD for a legitimate POU map which he ignored which resulted in a complaint to the state and subsequent SEPTEMBER 26 2017 STATE WATER BOARD NOTICE OF VIOLATION whose investigation is ongoing.

A BOUNDARY CHANGE TO THE SERVICE AREA CERTAINLY APPEARS TO HAVE OCCURRED AFTER 2008 AS STATED IN THE RESOLUTION.  The LAFCo 2008 booklet of the draft Municipal Services Review clearly shows that, that property, that 900 acres is outside the boundary and still within the SPHERE OF INFLUENCE (holds up and displays map to board ) ,

however, when Kampa applied for grants under the guise of supplying water to the people who needed it during the emergency drought he supplied the USDA with maps showing that it was within the boundaries. (Displays the two maps below)

Now, here’s the the crazy part that I only recently found out was that in May of 2014 there was a semi-closed meeting between LAFCO and representatives of the LDPCSD where indeed the boundary maps were changed.  I was going to attend that meeting, in fact I was going to get a ride with one of the uhm, what do you call them?  Citizen commissioners and I was told by the General Manager and the Board President I could not attend even though I had extensively researched this map issue for the four years that I was on that board.  I was not allowed to attend and what came out of it was a revised map showing (showing board map) 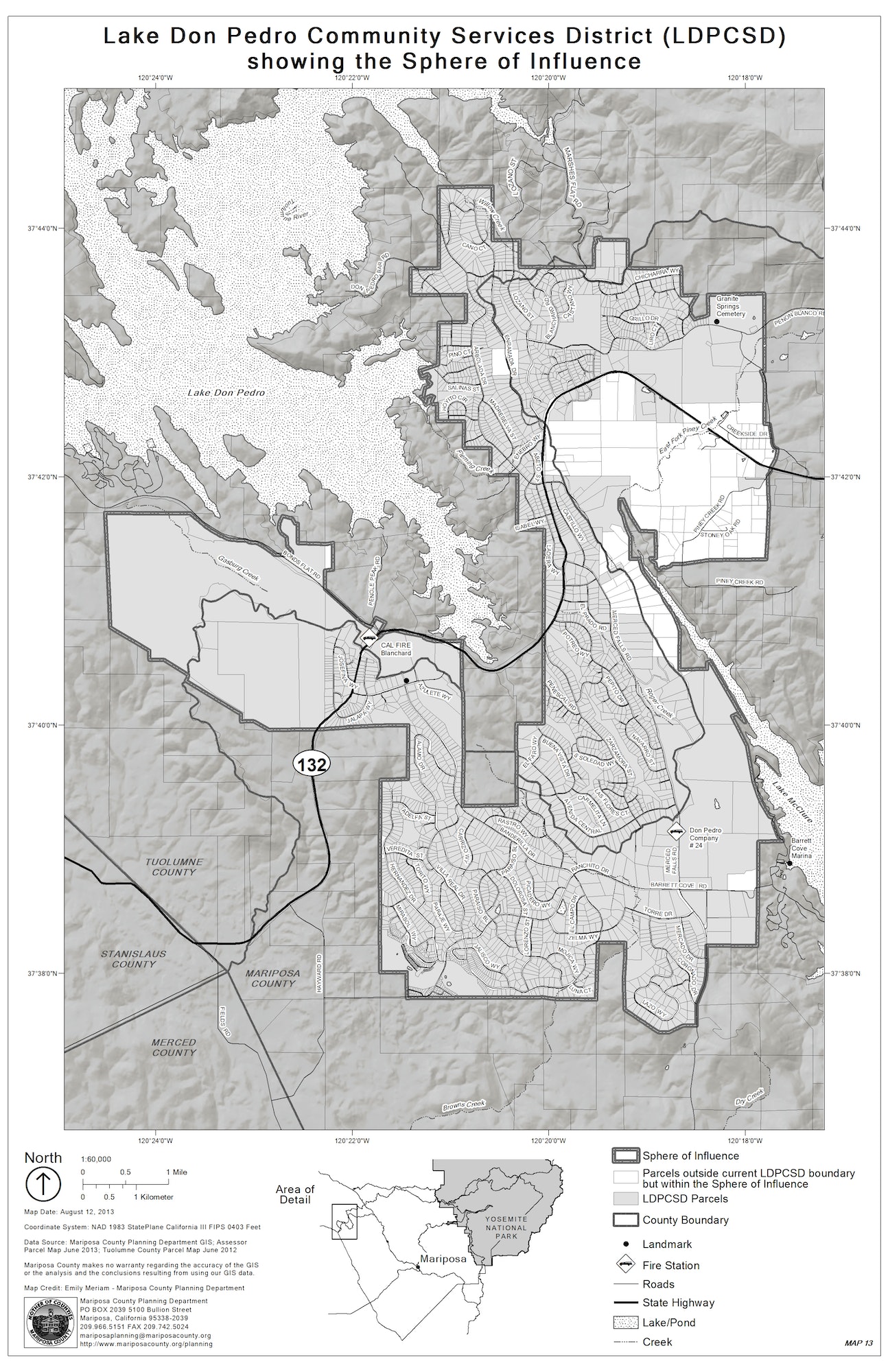 the subdivision in our Place of Use.  Ah, da da (whispering to self)  excuse me (looking through notes) Um OK the booklets and different maps,   Kampa was returned to the CSD  in October 2014 through a board orchestrated highly unethical closed recruitment process guaranteeing he would be the only person to be selected GM and provided access to over 1 Million dollars our district had saved after near bankruptcy we had to use a Prop 218 to remain solvent.  That money was used to leverage government grants for the development of a number of groundwater wells to provide water to service annexations Kampa himself set up twenty years before when first employed with our district and that’s the part I think is most reprehensible.  As an employee during 94-97 he pushed for annexations and when our board found out what he was doing behind the scenes he abruptly left.  But when he returned he had the experience of twenty years on the California Special Districts ah, ah, Association board came in and like a blitzkrieg just took over our district and our board just relinquished all powers to him.  Our water reports were discontinued, our legal notifications and  money spent –where it was going was discontinued, we don’t even know what our actual water loss is, we know that treated water on on a regular basis we’re losing between 31% to 47% of water every month.  And during March we lost 61% of course because of the floods.  In addition to this we have no idea how much water is being loss – the raw water, (supervisor points to time clock) I’m sorry, (papers rustling) the raw water loss between the lake and the, the ah, treatment plant this is something that has been going on for decades.  (Papers rustling on podium) I’ve been to the sheriff’s office, the district attorney’s office, the grand jury, I wrote an 89 complaint to, an 89 page complaint to the Department of Justice and was advised to seek private legal counsel.   This is absolutely reprehensible.  Thank you very much for your time.

(pause, walking away – I turn and say)

Oh, any questions?  I’m sorry.  (inaudible) Chair recognizes Supervisor Jones, yes I am…let’s set up a meeting and we’ll talk about it.

OK, I (stammering)  ahh, since you spoke up I should tell you at yesterday’s meeting Kampa and the directors denied everything that you had reported to this board as happening.  The directors, ah, didn’t ah, ah answer their phones and one didn’t want to talk with you, they said that was all wrong, that people probably only called and let it ring twice then hung up.  They denied what you said and Sir, I believe you.

So the map below is the new elections map (evidently based on the map approved a few months before Kampa’s unethical return in October 2014 during that “semi closed LAFCO/LDPCSD Meeting” where everyone got their maps squared away.  This map was sent by Syndie in the LDPCSD office to Mariposa County (and Tuolumne County).  Why was this particular map sent to county elections in 2014 and not already on file if Kampa’s “pet annexation” was above board in 1995?   Were district maps sent in for every election – NO!

Think about that, if it were the same map since 2008….why resubmit?  EVERYONE – especially sitting directors on the board (NOT INVOLVED WITH THIS COVER UP)- would have known there was an APPROVED 900 ac PROPOSED SUBDIVISION ADJACENT TO THE ONE WHOSE MANDATORY CUSTOMERS HAD TO PAY FOR THE NEW SUBDIVISION’S EXTREMELY EXPENSIVE GROUNDWATER SUBSTITUTION!!!!

THIS FACT (PUBLIC SUBSIDIZED GROUNDWATER FOR PRIVATE OUTSIDE POU DEVELOPERS) SHOULD BE A KNOWN DISCLOSURE FOR EVERY PROPERTY TITLE TRANSFER IN OUR SUBDIVISION BECAUSE WE ARE MANDATORY CUSTOMERS AND TRAPPED!

NOTICE WHO PLOTTED THIS IN THE BOTTOM LEFT CORNER AND THE DATE…..2008?  Same thing KAMPA did with WL11395 – slipping in his own fake maps that have been sent everywhere!  I’ve seen some of these KIM TOPIE MAPS  (she was a former LDPCSD employee who with her brother-in-law the General Manager Bob Kent, had been terminated from their positions in 2008.  I also understand she was not officially trained or certified to plot official maps!!!) where the SOI is about twice as large as the MERCED RIVER WATER ENTITLED CUSTOMERS ENTIRE SUBDIVISION!  When our CSD purchased that GIS PLOTTER back then they were cranking out incorrect (fake) maps left and right and there were subdivisions proposed all over the place!

The LAFCO MAP BELOW, is the same map still displayed on the LDPCSD website which those of us not privy to KAMPA’s “slumbering subdivision” believed were the actual boundaries!  Several directors did not know of this 1995 annexation of a proposed 900 acre subdivision on the shores of Lake McClure until I told them!   What a secret!  And motive for KAMPA’s quick unethical return—- to finish his slumbering annexation by providing GROUNDWATER SUBSTITUTION service before anyone noticed —– and all paid for with public funds!

Ahhhh, but remember the STATE WATER BOARD indicated there was another OUTSIDE POU PROPERTY ACCOUNT ADDED IN 2016?   That means Kampa also violated DISTRICT RESOLUTION 2013-4 which stopped the continued service outside the POU paid by the 99% of legal customers.

(BUT REMEMBER: even though apparently successful in surreptitiously annexing it under the radar and keeping it out of the public’s view for 20 years, it is still OUTSIDE THE PLACE OF USE FOR MERCED RIVER WATER – and that was the BIG SECRET KAMPA was concealing – the real reason for GROUNDWATER WELL DEVELOPMENT WITH PUBLIC FUNDS!  That’s why he made two separate attempts to abolish the prohibition against further service outside the water license POU!  They had to get the water to that development before people started asking questions.   Yup, Sneak, sneak, sneaky Pete.)

OH YEAH, I also put in a request for the August 1980 LAFCO metes and bounds field survey map which was established the initial boundaries of the LAKE DON PEDRO CSD  —   a map NO ONE APPARENTLY HAS ON FILE!  Something very wrong here folks.

(Remember that the facilities and assets of the prior SIERRA HIGHLANDS WATER COMPANY wasn’t even transferred to the new LAFCO created LDPCSD until the CALIFORNIA PUBLIC UTILITIES COMMISSION approval in January 1981 – effective Feb 1981.)

Sure appears as though TUOLUMNE AND MARIPOSA COUNTY LAFCos created our LDPCSD and then by way of annexing lands into its service area that it could not possibly provide water service due to WL11395 RESTRICTIONS ON RIVER USE, essentially forced their new district into the extremely expensive proposition of GROUNDWATER SUBSTITUTION FOR MERCED RIVER TRANSFERS in a known drought prone, fractured rock geologic region where ground wells are unreliable – while the thousands of INNOCENT BUT MANDATORY DISTRICT WATER CUSTOMERS OF THE SUBDIVISION PICKED UP ALL THE ADDITIONAL AND ESCALATING COSTS FOR PERPETUITY!  (That’s why the original developer abandoned all their ground wells….arsenic and other contaminants and poor quantity production!)

Sure the counties turn a blind eye to requests for help – it benefits them in developing thousands of acres of foothill grazing land with water service they don’t have to provide!  ONLY COLLECT TAXES ON DEVELOPMENT ETC.

And to think the grand jury referred to our district as a “problem child”.

You know, considering how the board is permitting PETE KAMPA to run this Community Services District and clamping down on and denying customers information – perhaps I have been going about this all wrong trying to inform fellow LDPCSD customers to rally support in a designated disadvantaged community?

Maybe I should not telegraph what is happening on my side of this argument equation any longer?  You know, keep working, but go dark for a while?

NEVER IDENTIFIED MYSELF TO THE BOARD OF SUPERVISORS BEFORE PUBLIC COMMENT!

(Fortunately our District II supervisor knows who to blame!  lol)